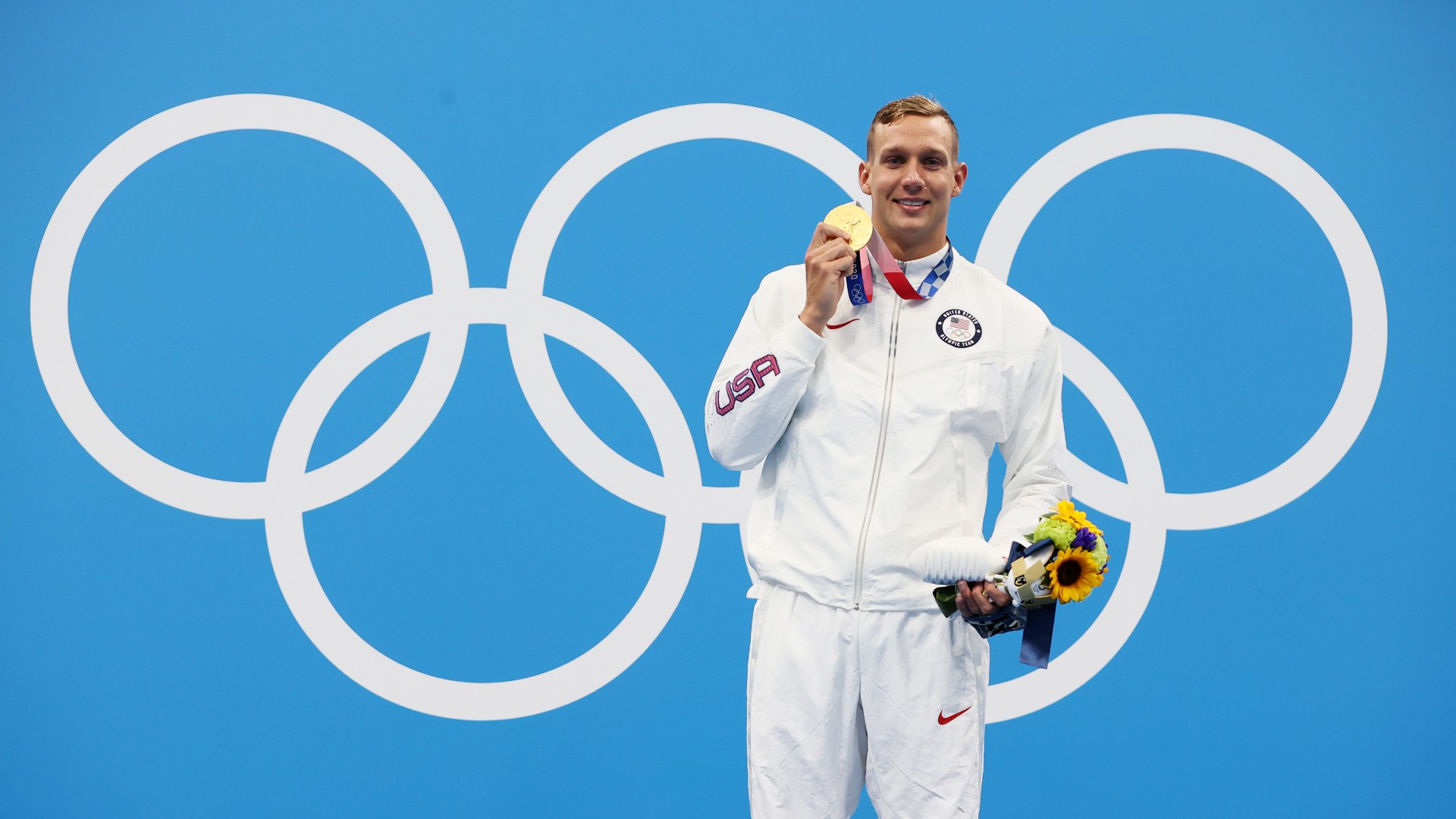 
Everyone expected Caeleb Dressel to be one of the swimming stars of the Tokyo Games, and the American lived up to the hype on Thursday.

Dressel started strongly and held off rival Kyle Chalmers of Australia at the end to win the 100m freestyle, the 24-year-old's first individual Olympic gold after taking two relay wins in Rio and one earlier this week.

The Floridian swam the 100m free three times in Rio and his time got worse from the preliminaries to the semi-finals to the final, ultimately leaving him sixth overall at 48.02 while Chalmers won gold with a 47.58.

This time, Dressel was at his best when it mattered most, posting a 47.02 to break an Olympic record that had stood since Beijing 2008.

Afterward, he described winning his first individual gold as a weight off his shoulders.

"It is different," Dressel said. "I didn't want to admit it but now that I did it, I can.

"It's a lot different – you can't rely on anyone else. It's just you and the water, there's no one there to bail you out. It's tough."

Winning the gold in a head-to-head showdown with the reigning champion made victory even sweeter.

"It's so fun going with Kyle – I mean, every time we make it good," Dressel said. "It's really fun to watch when we go head-to-head.

"I've got nothing but respect for him."

Brothers Valent and Martin Sinkovic have teamed up to win a rowing medal for the third consecutive Olympics.

The Croatians took gold in the men's coxless pair event at Sea Forest Waterway, leading throughout the race and winning by 1.29 seconds over Romania's Marius Cozmiuc and Ciprian Tudosa.

The Sinkovic siblings won gold in the double sculls five years ago in Rio after making up half of Croatia's quadruple sculls team that took the silver medal in London in 2012.

They are the first rowers to win gold in both the pair and double sculls since Canada's Kathleen Heddle and Marnie McBean did it in 1992 and 1996.

"It's an unbelievable feeling, hard to describe," said Valent, the older of the pair at 32. "This is like a new gold medal for us because it's in a second discipline, so we celebrate it like it's the first one for us.

"We couldn't be happier. Everything went as planned, we executed the race perfectly."

As for looking toward a potential fourth medal at Paris 2024, Martin Sinkovic said the brothers were done with pairs competitions but might look to row the four in three years' time.

The bros win it!

After becoming Olympic champions at Rio 2016, #CRO 's Sinkovic brothers add another gold to their collection in the men's pair at #Tokyo2020 ! @WorldRowing #Rowing @hrv_olimp_odbor pic.twitter.com/VotZKfaDfB

Sam Kendricks of the USA, the 2016 bronze medallist and 2017 world champion in the pole vault, has tested positive for COVID-19 and will not compete in Tokyo, the US Olympic and Paralympic Committee announced.

The USOPC said Kendricks has been transferred to a hotel and been placed in isolation in accordance with protocols.

"Sam is an incredible and accomplished member of Team USA and his presence will be missed," the USOPC said. "Out of respect for his privacy, we cannot provide more information at this time."

Earlier on Thursday in its daily media briefing, the International Olympic Committee said three athletes were among the 24 people who had come back positive for COVID-19 in the most recent round of testing.

STRAKA HAS CLUBHOUSE LEAD AS GOLF GETS UNDER WAY

Austria's Sepp Straka went out with the first grouping in the opening round of the men's golf tournament and set the pace for everyone who teed off behind him, taking the clubhouse lead with a 63 on Thursday morning.

Ranked 161st in the world this week after missing the cut at six of his last seven PGA Tour events, Straka turned in a bogey-free round at the Kasumigaseki Country Club, carding four birdies on the front nine and four more on the back.

Thomas Pieters of Belgium and Carlos Ortiz of Mexico finished with six-under-par 65s among the early starters to sit two back of the lead.

Several major winners including Rory McIlroy, Hideki Matsuyama and Collin Morikawa were still on the course.

Defending women's rugby sevens gold medallists Australia made a statement as they opened pool play with a crushing 48-0 defeat of hosts Japan after leading 24-0 at half-time.

Emma Tonegato got three tries while Demi Hayes and debutant Maddison Levi had two each for Australia, who face China later on Thursday.

"I definitely was concerned about this game," said Australia's head coach John Manenti. "Japan, playing at home, it would be very emotional for them and the pressures and expectations could have built on us.

"But I was really pleased with that clinical first half. We could relax at the end of the game and give a few of the girls debuts."

New Zealand, beaten finalists at Rio 2016, began their Tokyo campaign with a 29-7 win over Kenya.

BMX racers opened competition at Ariake Urban Sports Park, with defending gold medallist Connor Fields of the USA and current world number one Sylvain Andre of France among those booking their spots in the semi-finals.

Andre's countryman Joris Daudet had the top time of the day in his last run to make Friday's semis along with Rio 2016 bronze medallist Carlos Ramirez of Colombia.

On the women's side, world number one and Rio 2016 gold medallist Mariana Pajon of Colombia won all three of her preliminary races to advance, along with 2016 silver medallist Alise Willoughby of the USA.

Willoughby's team-mate Felecia Stancil turned in the best overall time of the day on her first run and also is one of the 16 semi-finalists.