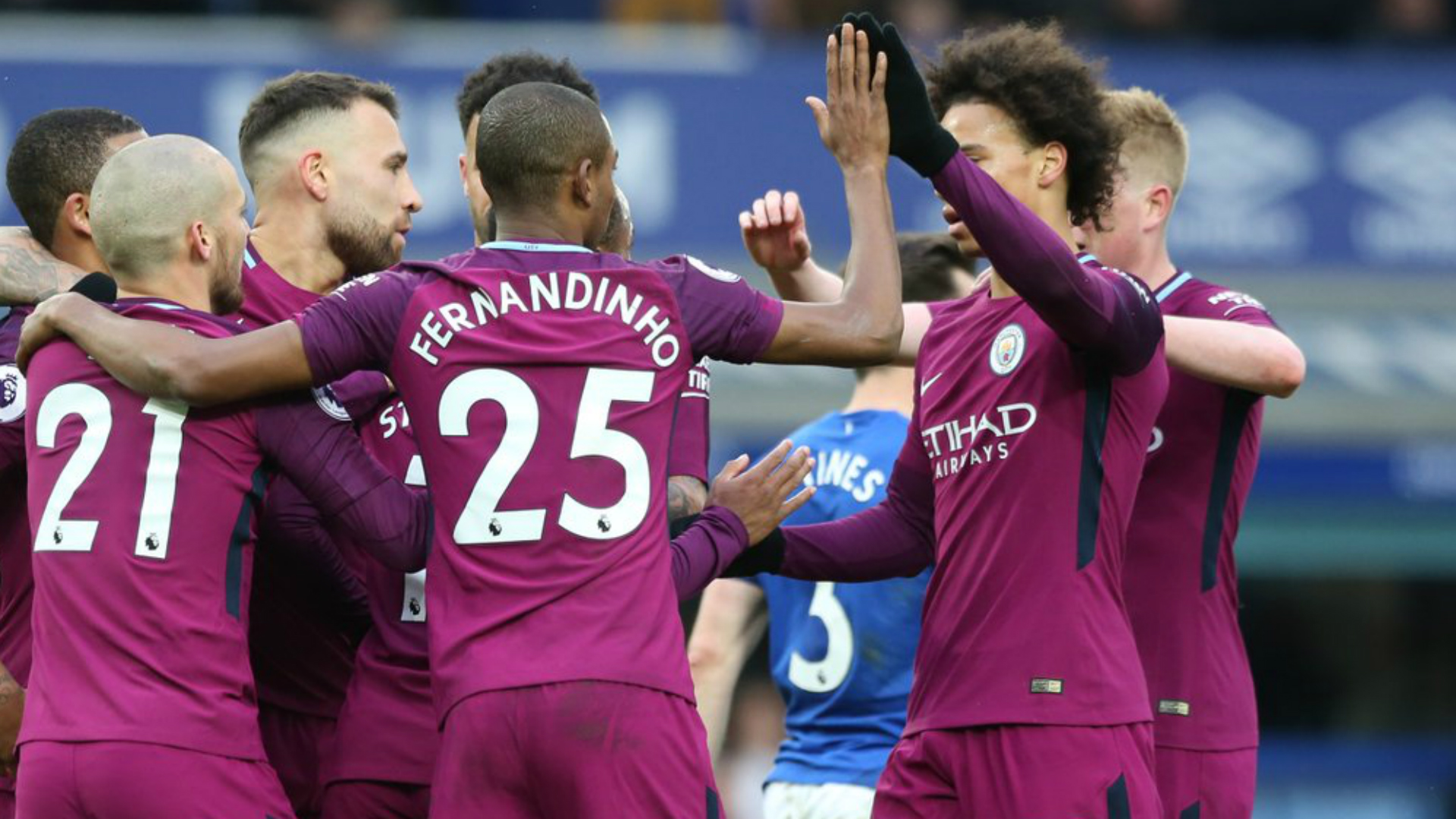 Everton 1 Manchester City 3: Guardiola's men one win away from title


Manchester City warmed up for a season-defining month with a commanding 3-1 win over Everton at Goodison Park to set up a potential Premier League title party against rivals United.

Pep Guardiola's side face Liverpool over two legs in the Champions League quarter-final and welcome their bitter Manchester rivals to the Etihad Stadium in April, when they will also travel to Tottenham.

It is a run of games that could see them win the Premier League and take a huge step towards European glory, making Saturday's dominant triumph a timely one as a victory next weekend would seal the top-flight crown.

The damage was done inside 12 minutes against a lacklustre Toffees team, with Leroy Sane and Gabriel Jesus on target, the former capping a fine move.

Everton won this fixture 4-0 last season, serving Guardiola with the biggest league loss of his managerial career, but the hosts – who also grabbed a draw in Manchester in August – were well off the pace on this occasion.

Guardiola's 50th English top-flight victory – which saw City become only the third team to beat all 19 opponents in a single Premier League campaign – was wrapped up before the break as Raheem Sterling got in on the act, with Yannick Bolasie's consolation goal doing nothing to prevent the leaders restoring their 16-point advantage at the summit.

There we were, now here we are.

One win from the title. pic.twitter.com/QczDcWyJtZ

The visitors soon forged ahead in eye-catching fashion as Aymeric Laporte and David Silva brilliantly linked up, the latter driving the ball across goal for Sane to expertly volley in from eight yards.

Bolasie then missed a glorious chance to level things up, heading over from close range, and Everton were quickly punished.

City sprung forward and Jesus converted his first league goal since November from Kevin De Bruyne's cross to put the champions-elect in control.

A near-miss from Leighton Baines' curling free-kick showed Sam Allardyce's men carried some attacking threat, but it paled next to the brilliance of his counterpart's well-oiled team.

Silva shot narrowly wide from just outside the box and then returned to his familiar role of provider, laying on a simple finish for Sterling at the end of a rapid City counter-attack.

Fernandinho's deflected strike called Jordan Pickford into action early in a second half during which Everton finally sought to challenge their opponents' authority.

That bolder approach paid dividends in the 63rd minute when Bolasie's low, skidding effort beat Ederson and went in off the Brazilian's right-hand upright to break the winger's 525-day Premier League scoring drought.

City were hardly rattled, though, and soon reasserted themselves by dictating the play, quashing any outside hopes of a Toffees revival in the closing stages.

While City will simply hope for more of the same in their upcoming blockbuster fixtures as they go in pursuit of a treble, Everton must pick themselves up for the Merseyside derby, when the home crowd will be far less forgiving of a performance like this one.

- Pep Guardiola is now the second quickest manager to reach 50 Premier League wins in the competition's history, doing so in just 69 matches. Only Jose Mourinho (63 games) reached 50 wins faster.
- Guardiola has now beaten 21 of the 22 Premier League teams he has faced as a manager in the division, only failing to beat Middlesbrough in two attempts (D2).
- This was the first time that Everton conceded three or more goals in the first half of a Premier League game at Goodison Park since August 2009 against Arsenal.
- City are just the third club to have three players (Kevin De Bruyne, Leroy Sane and David Silva) reach double figures for assists in a single Premier League season, after Liverpool (1995-96) and Arsenal (2004-05).
- David Silva has provided six Premier League assists against Everton, more than he has against any other side.
- Since the start of the 2015-16 campaign, Kevin De Bruyne has provided 42 assists in the Premier League, more than any other player in the top five European leagues.
- Raheem Sterling has scored 21 goals in all competitions this season; only one Englishman in the Premier League has more - Harry Kane (35).