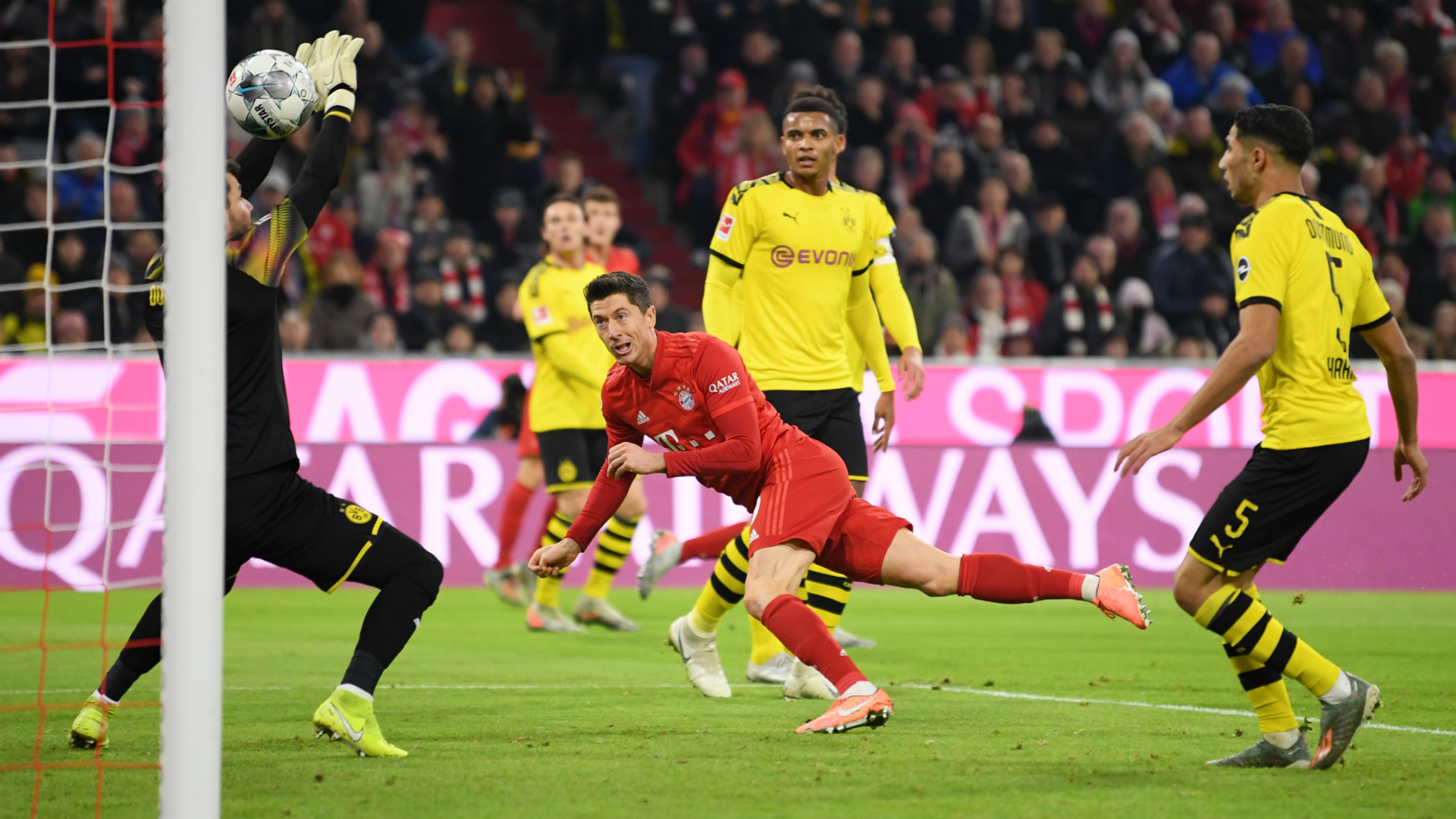 In their maiden league match since the departure of head coach Niko Kovac, the champions made relatively light work of their opponents in the first top-flight Klassiker of the season to bounce back from a 5-1 thrashing by Eintracht Frankfurt last week.

Lewandowski struck twice against his former club, with Serge Gnabry also on the scoresheet before a Mats Hummels own goal condemned BVB to a sixth consecutive Bundesliga defeat at the Allianz Arena.

While the result will help Hansi Flick's hopes of staying in charge of Bayern until at least the end of the season, Lucien Favre's position at Dortmund is now beginning to look uncertain.

Dortmund know only too well the danger of Lewandowski, but they granted the Poland striker the freedom of the penalty area to head home the opening goal from Benjamin Pavard's cross from the right.

Bayern were comfortable in the first half, with Axel Witsel firing over in the 45th minute when Dortmund at last managed a shot, the visitors having taken off Jadon Sancho nine minutes earlier.

Bayern took full control of proceedings two minutes after the restart, Thomas Muller racing clear down the left and crossing for Gnabry to finish after Lewandowski failed to make contact with the ball.

Lewandowski should have made it 3-0 just before the hour mark, collecting Kingsley Coman's pass, turning onto his right foot and curling a shot just past Roman Burki's left-hand post.

Substitute Paco Alcacer went close to halving the deficit before Muller took his assist tally in the Bundesliga to 101 since the 2004-05 season, gathering Lewandowski's pass and chipping the ball back to his strike partner, who tucked the ball beneath Burki.

With Dortmund's resistance broken, Hummels turned into his own net when under pressure from Thiago Alcantara to compound a miserable outing against his former employers.

What does it mean? Bayern back on track as Favre faces mounting pressure

Bayern are back to within a point of league leaders Borussia Monchengladbach, having played a game more, and they will likely still consider themselves title favourites regardless of who becomes their permanent new head coach.

As for Dortmund, Favre will surely now start to be feeling the pressure. His side have won only three of their past nine league games and could be six points off top if Gladbach beat Werder Bremen on Sunday.

Lewandowski too hot to handle

Lewandowski has scored in every one of his Bundesliga and Champions League appearances this season and is already on 23 goals in all competitions in 2019-20. He is practically unstoppable.

Julian Weigl stood and watched as Lewandowski drifted into space to open the scoring, underlining a fairly ineffective display that came to an end when he was taken off 61 minutes in.

- Since the beginning of the 2015-16 season, Bayern have scored 24 home goals against Dortmund in the Bundesliga, more than against any other team.
- Bayern celebrated their sixth straight Bundesliga home win against Dortmund. The last time they achieved this was from 1977 until 1984, when they triumphed in eight in succession.
- Dortmund had only two shots on Saturday – fewer than in any other game since detailed data collection began in the Bundesliga in 2004-05.
- Since Lewandowski joined Bayern in 2014 he has scored 16 Bundesliga goals against Dortmund – only the entire teams of Werder Bremen (19) and Schalke (18) have scored more against them in this period.
- Lewandowski is the first player in Bundesliga history to score on 11 consecutive matchdays (16 goals).