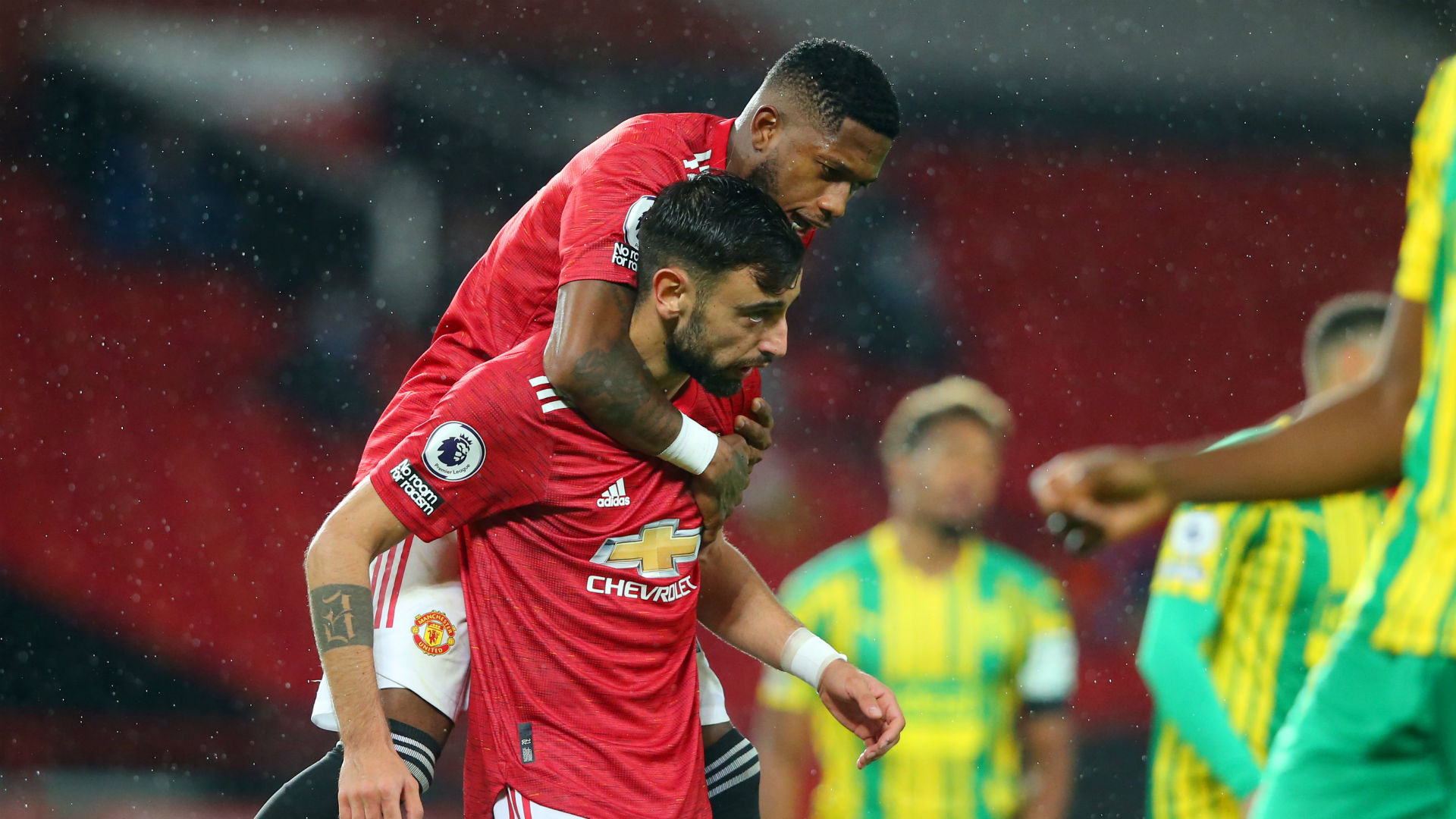 
Bruno Fernandes scored his seventh goal of the season with a retaken penalty as Manchester United claimed a controversial first Premier League home win since July with a 1-0 defeat of West Brom.

United have endured their worse home start in the top flight for 48 years, but finally secured three points at a ground that used to be such a fortress at the fifth attempt.

They needed some fortune to end a six-match run without a home victory that stretched back to last season, though, as referee David Coote overturned his decision to award struggling Albion a penalty at the start of the second half.

Fernandes breathed a sigh of relief after he was adjudged to have brought down Conor Gallagher and the midfielder was a lucky man soon after when he was given a second chance to score from the spot.

Sam Johnstone tipped away Fernandes's first attempt after Darnell Furlong was harshly penalised for handball, but came off his line too soon, and the United talisman did not pass up another opportunity to open the scoring.

50% - Half of Bruno Fernandes' Premier League goals for Man Utd have been penalties (7/14), the highest ratio of any player to score for the club in the competition. Expert. #MUNWBA

Johnstone made the first of several brilliant stops against his former club from an early Anthony Martial header and then produced a superb reflex save low to his left to thwart the United forward.

The Baggies had a first sight of goal when Karlan Grant's shot was tipped wide by David de Gea before Martial was denied a penalty when the France international felt he was tugged back by Matheus Pereira.

Albion thought they had a golden opportunity to take the lead just after the break and Coute's pitchside change of heart - which preceded an excellent De Gea stop from Conor Townsend - was not the end of the VAR drama.

Johnstone was shown to be too quick off the mark and Fernandes made no mistake second time around.

Substitute Callum Robinson struck the bar just after coming on and Johnstone produced another sharp save to prevent Marcus Rashford from doubling United's lead.

The Baggies' wait for a win goes on, while United - who were without Paul Pogba due to a knock - are up to ninth.

What does it mean? Relief for United, Albion unfortunate

Ole Gunnar Solskjaer will know the Red Devils must show more of a spark at home if they are to continue to climb the table, but back-to-back top-flight wins have eased the pressure on the United boss.

Slaven Bilic will rue Albion's misfortune and wonder why the decision to award Gallagher a penalty was changed when it appeared there was contact from Fernandes, with his side still languishing in the relegation zone.

The absence of Pogba in the squad will lead to further speculation over the France midfielder's future, despite Solskjaer stating he had picked up a knock.

Fernandes gave yet another demonstration that he is very much United's main man, with his vision, ability to drift into space and pick a pass making him the most likely to cut open a well organised Albion side.

The playmaker made six key passes, with no other United player producing more than one. Fernandes also had four shots as he stepped up again when an otherwise all-too predictable Red Devils side needed him.

There was more frustration for Martial, who has not scored a Premier League goal this season.

Martial has failed to find the back of the net in five top-flight matches in the 2020-21 campaign, although he came across an inspired Johnstone on Saturday evening, registering four shots - two of which were on target.

Key Opta facts
- United ended a run of six consecutive home league games without victory (D3 L3) since beating Bournemouth 5-2.
- West Brom have failed to win any of their opening nine games to a league season (D3 L6) for the first time since 1985-86.
- Fernandes’ opener was United's first home league goal in 324 minutes of football, since his second-minute penalty in the 6-1 defeat to Spurs in October.
- Since the start of last season, 16 per cent of United's Premier League goals have been penalties (13/79), the highest ratio of any team to have played in both seasons.

What's next?
United go in search of revenge when they face Istanbul Basaksehir in the Champions League on Tuesday, while Albion take on fellow strugglers Sheffield United at The Hawthorns next Saturday.