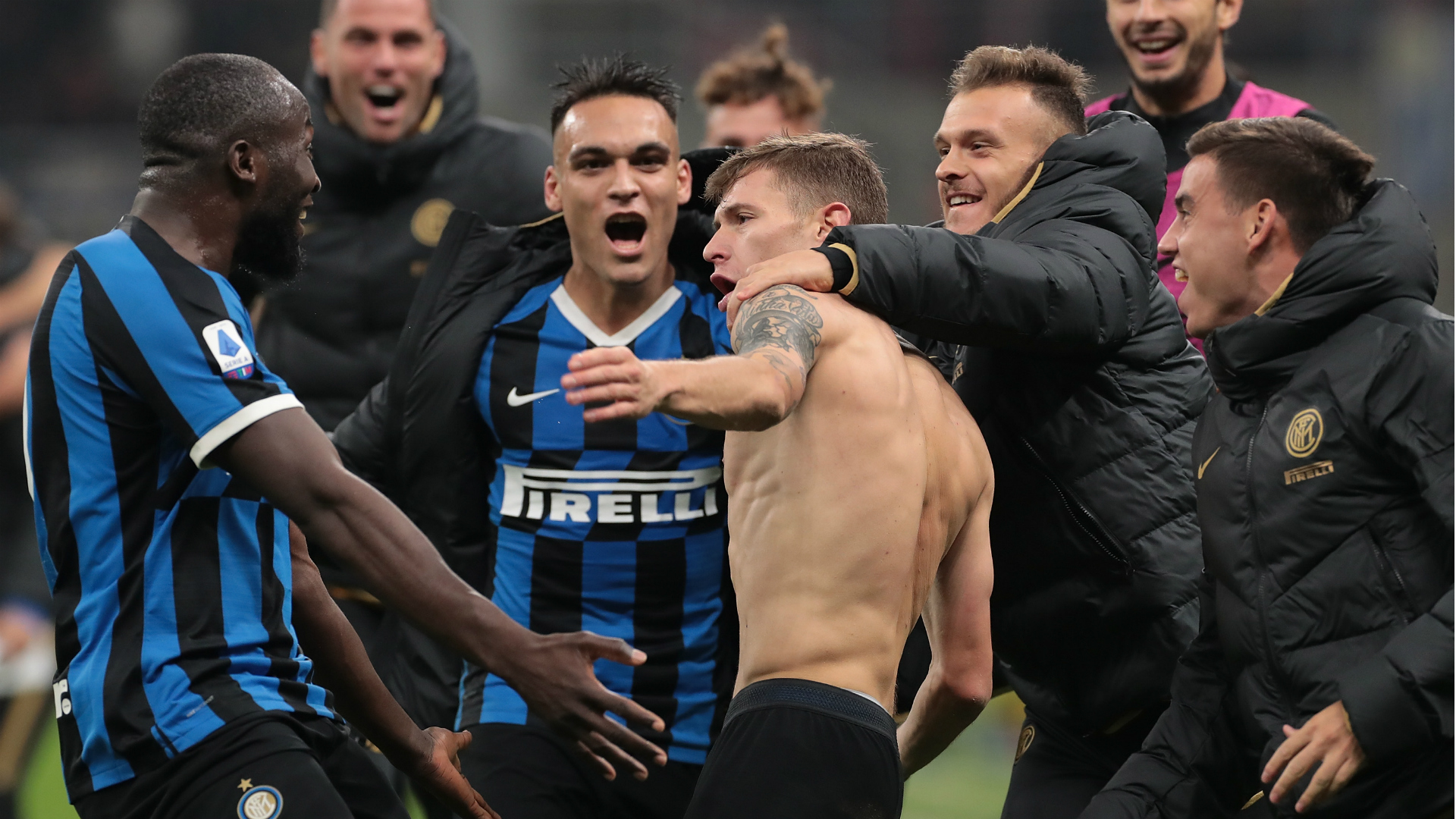 
Nicolo Barella scored a wonderful winner with seven minutes left as Inter came from behind to defeat Hellas Verona 2-1 and move top of Serie A.

Valerio Verre scored a 19th-minute penalty, his first Verona goal, to give the visitors a surprise lead at San Siro.

Inter piled on the pressure but could not find a breakthrough until Matias Vecino headed in to score for the second straight game with 25 minutes remaining.

And just as it looked like Verona would come away with a point, Barella produced a moment of magic.

The victory moved Inter two points clear of champions Juventus, who will attempt to respond when they host AC Milan in their game in hand on Sunday.

Great tenacity to come back and get the win!

After Lautaro Martinez headed over a good early chance, Verona took a surprise lead from the spot.

Verre sent Samir Handanovic the wrong way, the penalty awarded after the Inter goalkeeper had brought down Mattia Zaccagni, who was slipped through by Darko Lazovic at the end of a swift counter-attack.

The hosts bombarded the Verona goal from there, as Lukaku stabbed in a low effort that was well saved by Marco Silvestri before the Belgium striker dragged a shot wide from a better opportunity in Inter's next attack.

Marcelo Brozovic clipped the crossbar with a dipping 20-yard strike and defender Alan Empereur frantically cleared off the goal line after Silvestri had partially saved Vecino's shot from a tight angle.

The equaliser arrived for Inter when Vecino got on the end of Valentino Lazaro's cross and planted a header into the bottom corner from six yards.

Silvestri made key saves from Antonio Candreva and Alessandro Bastoni, whose cross-shot in a separate attack somehow went through Lukaku's legs when any contact with the ball was likely to end up in a goal.

Lukaku had another chance to snatch a winner, but could only send a header straight at Silvestri, who was caught off his line after a loose back-pass.

But Barella ensured the home fans would go away happy, cutting inside from the left and curling a magnificent strike into the far corner.

2 - #Inter have scored in all their first 12 matches in a single Serie A campaign for only the second time in their history after 1997/98 (under Luigi Simoni). Uncontainable. #InterVerona pic.twitter.com/rsBw33aoxq

What does it mean? Ideal Inter boost after Dortmund collapse

After a miserable collapse against Borussia Dortmund in the Champions League on Tuesday was followed by a rant from Antonio Conte, Inter had their backs against the wall when they fell behind in the first half.

But an impressive response saw them pepper the Verona goal and ensure that, regardless of Juve's result against their city rivals, they will be right in contention after the international break.

Inter racked up 38 shots, with their wide players, creative stars and even their defence providing opportunities galore for the men in attack.

Centre-backs Stefan de Vrij – who found Barella for the winner - and Bastoni made nine chances between them, Lazaro and Cristiano Biraghi were a constant threat out wide, while Martinez was showing his usual all-round ability up top.

Lukaku lax in front of goal

Lukaku came into the game looking to become the first player since 1948 to score 10 goals in his first 12 Serie A appearances, but struggled badly in front of goal as he was unable to achieve the feat, failing to score from eight attempts and unable to get a touch on Bastoni's effort with the match up for grabs at 1-1.

- Inter have scored in all their first 12 matches in a single Serie A campaign for only the second time in their history and for the first time since 1997-98 (under Luigi Simoni).
- Inter are unbeaten in their 29 home games in the top flight vs Verona (W18 D11): their joint-record against a side in the competition, alongside Palermo.
- Vecino - who scored his first home goal in Serie A since January 2018 - has scored three of his seven goals with Inter in the top-flight with a header.
- Silvestri has made nine saves in this match: he made more saves in a Serie A encounter only against Benevento (12) in April 2018, also with Verona.

Inter will seek a fourth straight league win when they play away to Torino on November 23, while Verona host Fiorentina the following day.