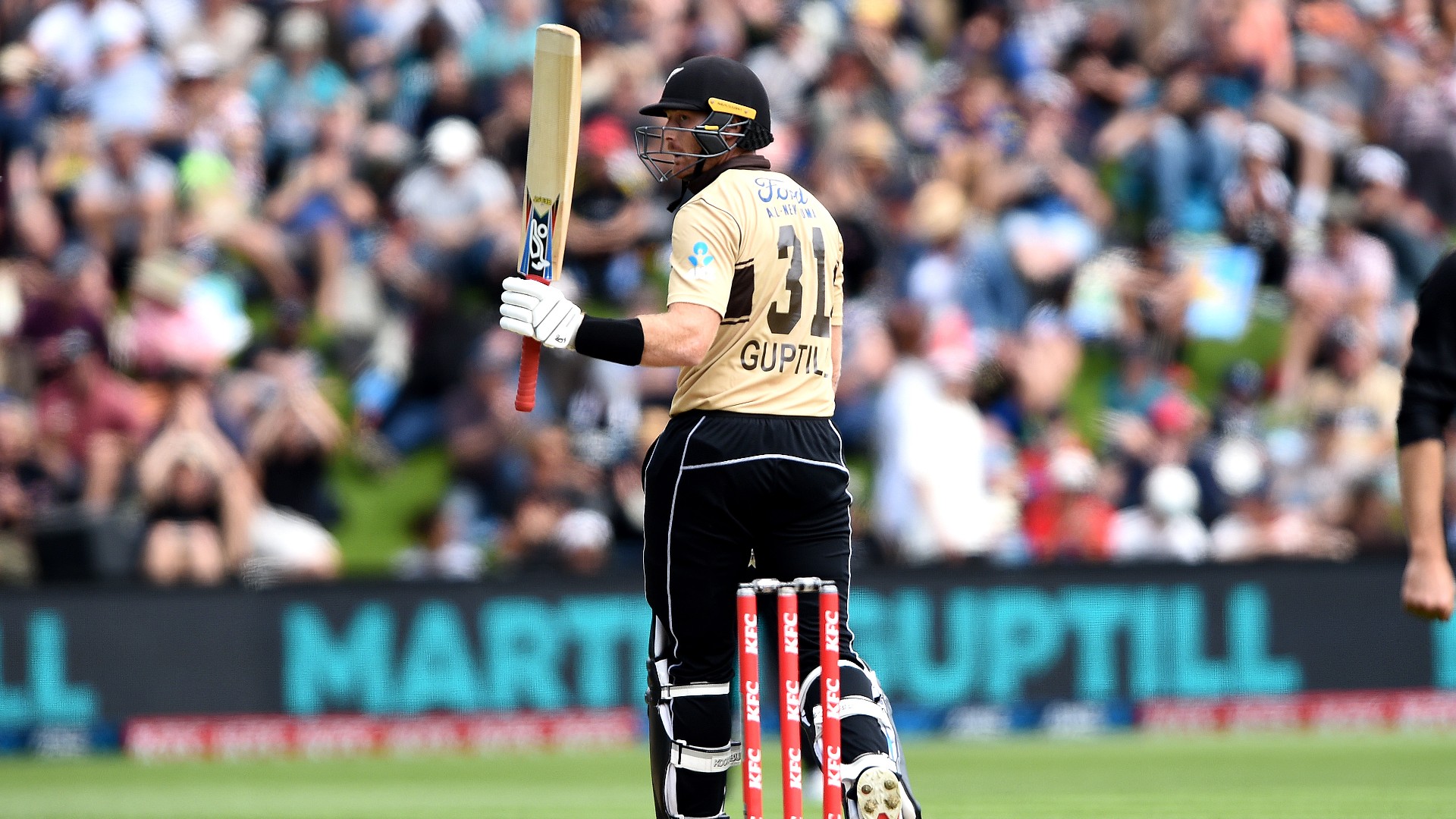 
Martin Guptill starred as New Zealand equalled their six-hitting record before holding on to win a nail-biting second Twenty20 against Australia by four runs in Dunedin.

Guptill thundered 97 off 50 balls, including eight sixes and six fours, before being caught off Daniel Sams' bowling to miss out on a third career T20 international century as the Black Caps posted a bumper 219-7.

Captain Kane Williamson's 13th T20 half-century was subdued by comparison, hitting three sixes on his way to 53 runs from 35 balls, while James Neesham crashed six maximums to finish unbeaten on 45 from 16 balls.

The hosts' 18 sixes at University Oval tied their all-time record in a T20 international and proved a shade too much for Australia to chase down, as Mitchell Santner claimed 4-31 to rip through the middle order.

Josh Philippe (45 off 32) had steadied the ship, before Marcus Stoinis and Sams came together at 113-6 and picked up the pace in the last seven overs to give New Zealand a major scare.

Stoinis recorded his first T20 half century as Australia closed on an unlikely victory, needing 36 off the final three overs, and 15 off the last, but Neesham's full toss saw Sams caught for 41 to end a thrilling partnership of 92 runs off 37 balls.

Neesham tempted Stoinis into a big shot, which ended his innings for 78, and the tourists came up short on 215-8 as New Zealand sealed a 2-0 lead in the five-match series, going into the third T20 in Wellington on March 3.

WHAT A GAME OF CRICKET. @JimmyNeesh with 2 wickets in the 20th over to defend the total and maintain the team's unbeaten record at University of Otago Oval. Serious striking from Marcus Stoinis for Australia. #NZvAUS pic.twitter.com/L357Cw9t53

The hosts came out swinging from the off, with Guptill posting 17 runs in the opening three overs, but the Black Caps were temporarily slowed when Kane Richardson claimed Tim Seifert (3) with his first ball.

But Guptill blazed through the rest of the power play, thumping a pair of sixes off Adam Zampa's bowling, before bringing up his half century from 27 balls and taking the score to 59-1 off seven overs.

Australia controlled the run rate over the next few overs until Williamson opened up with a maximum off Ashton Agar as New Zealand made it to 85-1 at the halfway point of the innings.

Guptill slammed back-to-back sixes off Stoinis to take his team past 100, and made it four maximums in the space of five balls as a Kane Richardson over was crunched for 21 to bring up the 100 partnership.

Williamson brought up his 50 for 32 balls and Guptill fell three runs short of 100, with Stoinis taking the catch in the deep, before Neesham teed off with three straight sixes.

The tourists gave themselves a chance with Jhye Richardson and Kane Richardson conceding only 10 runs combined off the 18th and 19th, but their hopes of chasing 220 suffered a blow when Matthew Wade (24) fell to Tim Southee (1-47) to leave them at 34-1.

After Aaron Finch lost his wicket to Ish Sodhi for 12, Santner took control, removing Glenn Maxwell (3) and claiming three more wickets in a single over – including Philippe – to leave Australia needing 107 with seven overs remaining.

But the mood turned quickly as Stoinis and Sams' electric partnership created a tense finish before the pair were both caught off Neesham's bowling to leave the New Zealanders breathing a sigh of relief.