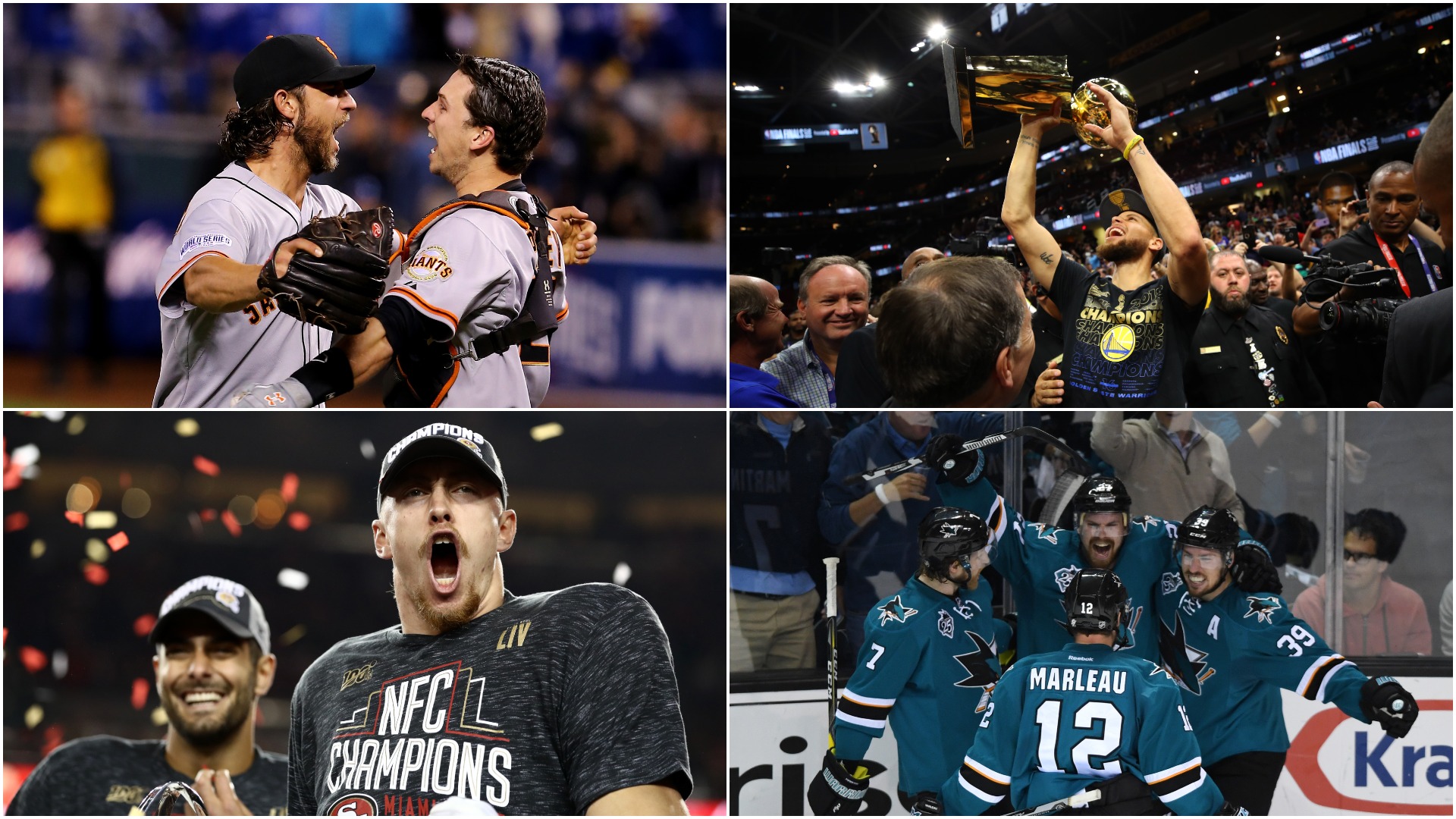 
When the San Francisco 49ers face the Kansas City Chiefs in Super Bowl LIV, they will have a chance to round off an incredible decade for Bay Area sport in style.

The 2010s has seen three World Series trophies and three NBA titles come to the Bay, with the 49ers and San Jose Sharks also enjoying postseason positives alongside the dominance enjoyed by the San Francisco Giants and Golden State Warriors.

Sunday's showpiece in Miami, which brings to an end a magnificent 2019 season for the 49ers, will mark the 11th championship decider to feature a Bay Area team since 2010.

The 2019 Niners will hope they can add the finishing touches to a remarkable 10 years, and here we look at the teams that have gone before them in reaching the biggest stage in their respective sports in a decade that has brought plenty to celebrate.

The Giants moved from New York to San Francisco in 1958, but the city's fans had to wait 52 years to see the franchise win a World Series title as a west coast team. That drought was finally ended in manager Bruce Bochy's fourth season in charge.

The Giants beat the Texas Rangers in five games, with Edgar Renteria hitting a three-run home-run in a decisive 3-1 victory secured when Brian Wilson's strikeout clinched the first of three titles in five seasons for Bochy's men.

On the back of consecutive home defeats in the National League Division Series against the Cincinnati Reds, the Giants' hopes of regaining the World Series looked slim. However, after winning game three in extra innings, San Francisco claimed that series in five games thanks to NL MVP Buster Posey's grand slam in the decider.

They pulled off another comeback in the Championship Series, recovering from 3-1 down to defeat the St. Louis Cardinals in seven games, but the World Series proved a routine affair as the Giants swept the Detroit Tigers to take the trophy back to San Francisco.

Having suffered an agonising overtime loss to the New York Giants the season before, the 49ers went one better and, thanks to Colin Kaepernick's emergence and the play of a dominant defense, made it to the Super Bowl in New Orleans.

There would be more heartbreak for the Niners, though, as – in a game remembered by most for the power outage that caused a 34-minute interruption in play – Jim Harbaugh's team were unable to complete a comeback from 28-6 down. John Harbaugh won the battle of the brothers, his Baltimore Ravens clinging on for a 34-31 win.

Few would have expected the Giants to improve on their heroics of 2012 when they made the postseason as a Wild Card team but, after crushing the Pittsburgh Pirates in the Wild Card game, they embarked on another improbable run.

The Giants saw off the Washington Nationals and then won the NLCS against the Cardinals on home soil in Game 5 thanks to Travis Ishikawa's walk-off homer. An epic World Series with the Kansas City Royals went seven games, with Madison Bumgarner's Herculean pitching effort the decisive factor.

Golden State spent much of the first season of their dynasty listening to questions about whether a "jump-shooting team" could win the NBA title. Those questions were emphatically answered time and again over the coming years by one of the most dominant teams in NBA history.

In Steve Kerr's first season after taking over from Mark Jackson, Stephen Curry claimed the MVP award as the Warriors went 67-15. They eventually progressed to the NBA Finals against LeBron James and the Cleveland Cavaliers, with the Warriors ending a 40-year wait for a title in six games thanks in large part to the tireless efforts of Andre Iguodala, who was named Finals MVP for his defense on LeBron.

Having formed in 1991, the Sharks' quarter-century wait to experience a Stanley Cup Finals series was finally ended when they overcame the St. Louis Blues in six games to win the Western Conference.

The Cup did not make its way to the Bay for the first time, however, as the Pittsburgh Penguins prevailed 4-2 in an absorbing finals series that featured two overtime games. San Jose have yet to return to the same stage and the Sharks' wait to reach the top of the mountain in the NHL goes on.

The Warriors appeared destined to secure back-to-back titles throughout the 2015-16 campaign, which they started with an astounding 28-game winning streak, the second-longest in NBA history.

Behind a unanimous MVP season from Curry, the Warriors broke the record for regular-season wins by going 73-9 but, in the postseason, they made history for the wrong reasons. Golden State overturned a 3-1 deficit to the Oklahoma City Thunder to reach the NBA Finals, but they ended up on the other end of a comeback as LeBron delivered on his promise to bring a title to Cleveland with the Cavaliers. The Warriors became the first team in history to lose a Finals having led 3-1.

Golden State's response to their heartbreaking defeat to the Cavs was to add one of the best ever to take to the court to the roster. Kevin Durant had been on the Thunder team undone by the Warriors in the Western Conference Finals, but he controversially made the move to join his conquerors, and it was one that paid huge dividends.

The Warriors did not put the same effort into the regular season as they had done when in pursuit of the record in 2015-16 but, with Durant in the line-up, they were unstoppable in the playoffs. Golden State lost just one game in the postseason, swatting aside the competition and defeating the Cavaliers 4-1 in the Finals. Durant averaged 35.2 points per game and added the only two things missing from his glittering resume: an NBA title and the Finals MVP award.

Though the second act with Durant on the team may not have been quite as impressive as the first – the Warriors had to fight back from 3-2 down to beat the Houston Rockets in the Western Conference Finals – LeBron and the Cavs still proved powerless to stop them marching to back-to-back NBA crowns in a Finals sweep.

Such was the Warriors' dominance that the biggest question of the Finals was whether it would be Curry or Durant who would win Finals MVP. Durant won that debate, further vindicating the decision that caused so much consternation two years earlier.

The Warriors' addition of DeMarcus Cousins in the offseason following their third title in four seasons gave them the possibility of starting five All-Stars. Rarely did a line-up of Curry, Durant, Cousins, Klay Thompson and Draymond Green see the floor at the same time, however, and injuries eventually became too much for Golden State to overcome.

Durant missed a large portion of the postseason with a strained calf and attempted to return in Game 5 of the Finals with the Toronto Raptors. His decision proved ill-fated, though, as Durant ruptured his Achilles in what proved his final game for the Warriors. Golden State pushed the series to Game 6, but Thompson's torn ACL effectively ended their hopes as the Raptors won the title for the first time.

It has been an incredible turnaround for the 49ers who, after going 6-10 and 4-12 in their first two seasons under Kyle Shanahan, are a win away from a sixth Super Bowl title.

The Niners went on to win the Super Bowl and start a dynasty under Walsh and, throughout an emotional rollercoaster of a season in which they have won several nail-biting games, Shanahan's men have felt like a team destined for glory.

Their challenge now is to turn destiny into reality.