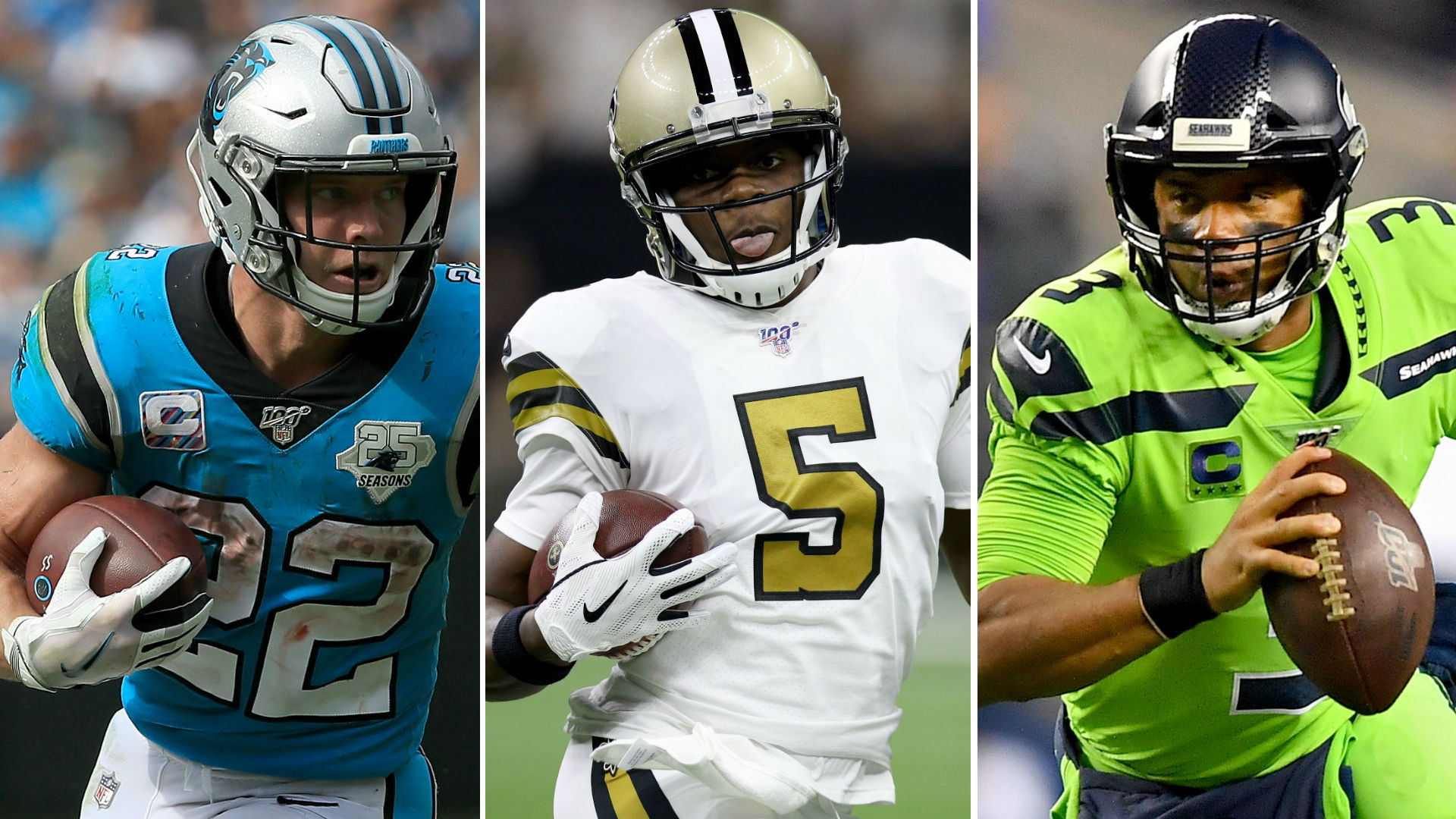 
This week's NFL slate features a showdown between rookie quarterback Daniel Jones and veteran Tom Brady, as well as a battle between two winless teams in the Washington Redskins and Miami Dolphins.

The Giants have won three of their last five matchups against the Patriots, Including victories in Super Bowl XLII and XLVI. All five of these games have been decided by four points or fewer. New England won the most recent matchup 27-26 in Week 10 of the 2015 season thanks to a 54-yard field goal by Stephen Gostkowski with one second remaining in the fourth quarter.

Jones was sacked four times in New York’s 28-10 loss to the Minnesota Vikings in Week 5. New England lead the NFL with 24 sacks this season; the Patriots have recorded at least five sacks in four consecutive games, the longest streak by any team since the Dallas Cowboys also did so in four straight games in 2008. The last team with five or more sacks in five straight games was the Kansas City Chiefs in 1997.

Carolina’s Mario Addison ranks third in the NFL with 6.5 sacks, trailing only Tampa Bay’s Shaquil Barrett (9.0) and Cleveland Browns star Myles Garrett (7.0). Despite not recording one in Week 5, Barrett’s nine sacks are the most by a linebacker through five games in a season since the Indianapolis Colts’ Robert Mathis had 9.5 in 2013.

Tampa Bay's Chris Godwin leads the NFL in touchdown receptions (six) and ranks third in receiving yards (511) behind Michael Thomas (543) and Amari Cooper (512). Godwin's 511 receiving yards are the second most through five games in a season in franchise history (Keyshawn Johnson, 548 in 2001). Godwin has five games with at least 100 receiving yards since Week 13 in 2018 - the most in the NFL over that time.

The Jaguars have had at least 450 yards of offense in each of their last two appearances, the third time in franchise history they have done that in back-to-back games. They have never done so in three straight games.

Baker Mayfield has thrown an NFL-high eight interceptions this season, and his 22 picks since the beginning of 2018 are also the most in the NFL. Mayfield set career lows in completions (eight), completion percentage (36.4 per cent), passing yards (100) and yards per attempt (4.6) in Cleveland’s loss to San Francisco on Monday.

Odell Beckham Jr has just 23 receptions on 43 targets in five games this season. Beckham has recorded exactly two receptions in each of his last two games; he had just one game with two (or fewer) receptions in his 59 games with the Giants from 2014-18.

Carson Wentz attempted 29 passes against the New York Jets while the Eagles ran the ball 29 times. Philadelphia is 18-18 when Wentz attempts at least 30 passes compared to 8-1 when he has under 30 attempts.

After registering three sacks in their first four games, the Eagles got 10 in their 31-6 win over the Jets, one shy of the franchise record (11 versus Dallas in 1991). Under defensive coordinator Jim Schwartz, Philadelphia are 26-11 when picking up multiple sacks compared to 6-10 with one or fewer.

The Chiefs were held to just 13 points in their home loss to Indianapolis last week, their fewest in a game with Patrick Mahomes at quarterback. The loss snapped Kansas City’s NFL-record 25-game streak of scoring at least 25 points.

Mahomes is the first player in NFL history to have 300-plus passing yards and zero interceptions in each of his first five games of a season. However, Mahomes has thrown just one touchdown pass over his last two games after throwing 10 in his first three games of the season.

The Falcons have committed 11 turnovers, tied with the Giants and Redskins for most in the NFC, while the Cardinals have coughed the ball up just four times, tied with the Chicago Bears and the Packers for fewest in the conference. League-wide, teams are 44-14-1 (.754) this season when winning the turnover battle.

Matt Ryan has thrown for at least 300 yards in three consecutive games, all Falcons losses. Only three quarterbacks have ever done this in four straight games: Philip Rivers in 2015, Matt Schaub in 2010 and Bill Kenney in 1983.

Kyler Murray ran for 93 yards in the win over the Bengals, the most by a Cardinals QB in the Super Bowl era. He also scored a rushing touchdown, becoming the third rookie QB in the last two seasons to rush for at least 90 yards and score a rushing TD (Jackson and Josh Allen in 2018).

San Francisco have 27 rushing plays of 10 or more yards this season, tied with Minnesota for the most in the NFL. Los Angeles have allowed at least 10 yards on 13.9 per cent of opponents' rushes, fourth highest in the NFC over that span.

Jared Goff has thrown seven interceptions in 2019, matching his total from 15 starts in 2017, and five shy of his 12 in 16 starts in 2018. The Rams are 11-11 when he throws at least one interception – after losing the first six such games, the Rams won the next eight, but have since lost five of the last eight.

The Titans haven't won in Denver since October 4, 1987, a game that was played by strike-replacement players. The last time the Titans (then the Houston Oilers) won a non-strike game in Denver was November 2, 1980. In Tennessee's last visit to Denver in 2013, Matt Prater set the NFL record for the longest field goal – a 64-yarder in a 51-28 Broncos win.

The Titans have turned the ball over just once this season, becoming the sixth team in the Super Bowl era with one or fewer turnovers through five games of a season. The Broncos' three takeaways are tied for the third fewest in the NFL this year.

Phillip Lindsay is averaging 5.23 yards per rush in his career, the fourth-highest mark through 20 career games since the NFL-AFL merger (minimum 200 rushes). He had five runs of at least 10 yards last week against the Chargers after doing so only once through Week 4.

Sam Darnold is expected back under center for the Jets after missing three games due to mononucleosis. Since the start of last season, New York average 21.7 points per game when Darnold starts, compared to 11.3 in games he has missed. Dating back to last December, Darnold has gone 155 passes without an interception.

Prescott passed for a career-high 463 yards against the Packers last week but was intercepted three times, matching his career worst. It was the first regular-season loss for Dallas in a game in which Prescott passed for 275 or more yards; the team had been 10-0 in such games.

After scoring 97 points in starting the season 3-0, the Cowboys scored only 34 points in dropping their next two games. They managed a season-low 257 yards in a Week 4 loss at New Orleans, then dropped a 34-24 home game to Green Bay on Sunday despite piling up 563 yards, fifth-most in team history. Dallas have six giveaways in their last two games (only two previously).

Pittsburgh are 1-4 for the first time since 2013 and haven’t lost five of their first six games since 1988. The Steelers hold the longest active streak of not starting out 1-5 or worse, with the Broncos (1994) the only other team not to do so prior to 1995.

With Ben Roethlisberger and Mason Rudolph injured, Devlin Hodges is expected to be the first undrafted rookie to start at quarterback for the Steelers since Kent Nix in 1967. Only once since the 1970 AFL-NFL merger have the Steelers had three starting quarterbacks in a season’s first six games. That came in 2010, the year Roethlisberger began the season serving a four-game suspension

Joey Bosa has had at least a half-sack in six consecutive home games, the longest streak by a Chargers player since Marcellus Wiley did so in eight straight from 2001-02. Bosa’s 31.5 sacks are tied with J.J. Watt for the second-most among active players through 40 career games, trailing only Von Miller (35).

Since losing an NFL-record 23 consecutive road games to the Packers from 1992 to 2014, the Lions have left with a win in three of their last four visits to Lambeau Field. Detroit’s 31-0 win over the Packers in last year’s season finale was their largest margin of victory in Green Bay since a 40-0 rout in 1970.

Matthew Stafford needs 352 passing yards to become the fastest player in NFL history to reach 40,000 for his career. Matt Ryan currently holds the record with 151 games, while Stafford will play in his 146th game on Monday.