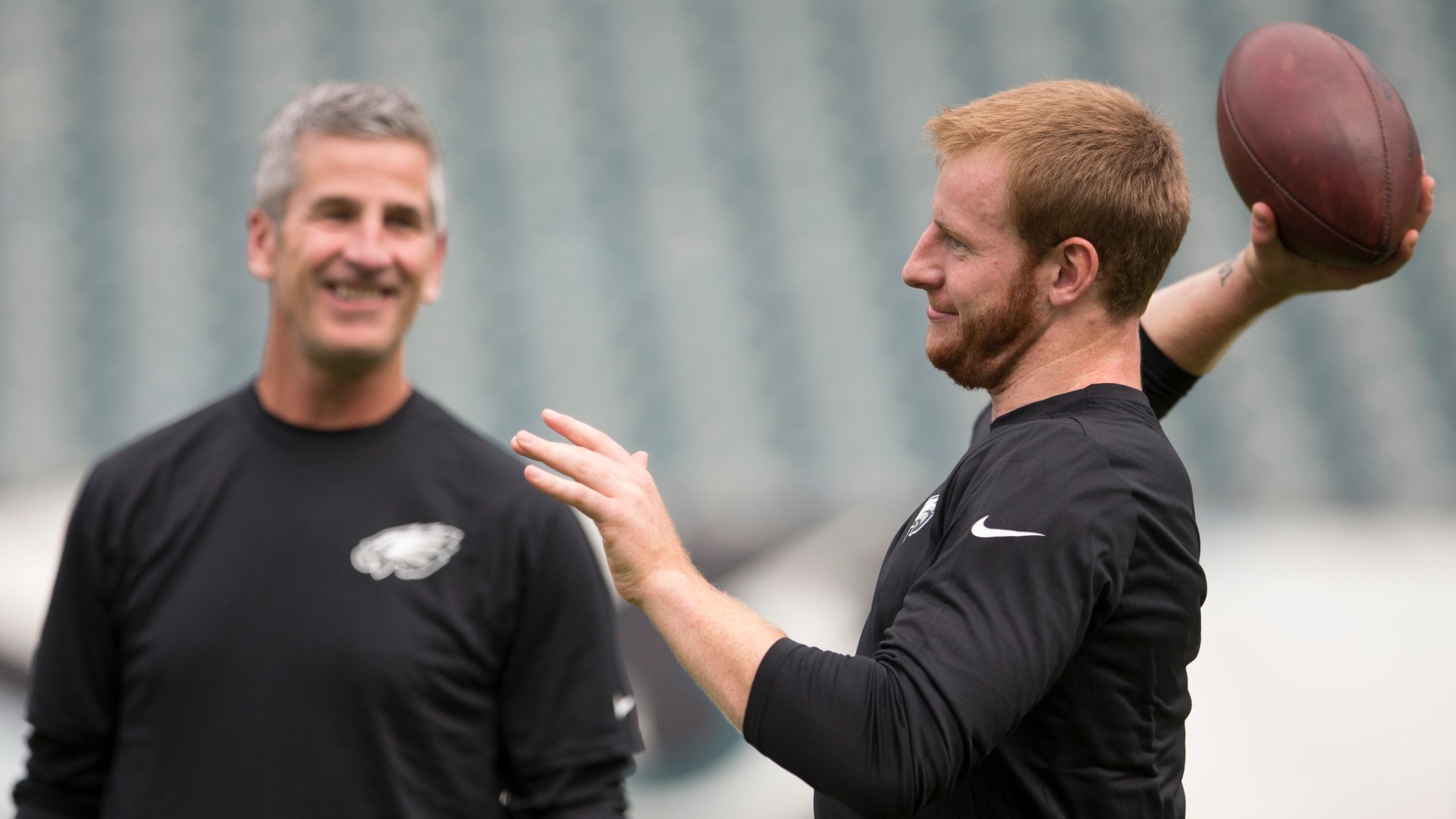 Indianapolis put faith in Reich's reclamation project – Can reunion with Wentz put Colts over the top?


When the Indianapolis Colts were eliminated by the Buffalo Bills in the Wild Card round of the playoffs, they did not look like a team ready to take on a reclamation project.

The seventh-seeded Colts pushed a Bills team that reached the AFC Championship Game all the way before falling to a 27-24 defeat.

Yet that exit, combined with Philip Rivers' retirement after one season, left the Colts in the empty void of quarterback purgatory, without a solution on the roster and not in a position in either free agency or the draft to find a long-term solution.

The Colts' answer to their quarterback problem was to take a chance on a player most in the NFL appeared reluctant to consider, putting faith in their head coach Frank Reich to return Carson Wentz to his MVP-calibre form of 2017.

Indianapolis sent a 2021 third-round pick and a 2022 conditional second, which can become a first if Wentz plays 75 per cent of the offensive snaps or if he plays 70 per cent of the snaps and the Colts make the playoffs, to the Philadelphia Eagles to acquire the former second overall pick.

They may not have given up too much in terms of premium draft capital, yet the gamble on a quarterback who was one of the worst in football last year was one few would have advised them taking.

Is their belief in the ability of Reich, who was Wentz's offensive coordinator with the Eagles in 2017, to turn the much-maligned signal-caller's career around justified? We looked at the Stats Perform data in an attempt to answer that question.

The scale of the challenge

Eventually benched for Jalen Hurts as his relationship with then-head coach Doug Pederson reportedly deteriorated, Wentz endured the worst season of his career in 2020.

Only Sam Darnold had a lower passer rating than Wentz's 72.8, while his adjusted net yards per attempt (ANY/A) average of 3.98 was last in the league.

The disparity between Wentz's numbers in that regard and those of Rivers, who was 10th with an ANY/A of 7.18, helps underline the scale of the challenge facing Reich and his staff in rehabilitating a quarterback who once looked like the future of the league.

Sacked a league-high 50 times in 2020, Wentz had 27 completions of 20 yards or more compared to 56 for Rivers, whose significant edge in big plays came despite Wentz boasting a slightly superior passer rating on throws of 21 air yards or more (70.8 to Rivers' 67.1), pointing to the large gap in explosive passes being a product of Indianapolis having superior protection, receiver performances and play-calling.

Before tearing his ACL in Week 13, Wentz thrived under Reich to the extent that he still finished the year second in passing touchdowns (33) and touchdown to interception ratio (4.71).

Reich's success in getting the best out of his quarterbacks has largely continued in Indianapolis since he stepped in after Josh McDaniels went back on his agreement to take over as coach.

Andrew Luck's sole season with Reich at the helm in 2018 saw him throw 39 touchdowns, second only to Patrick Mahomes, while he was fifth in red zone passer rating among quarterbacks with at least 50 attempts inside the 20 and 11th in ANY/A.

Both Philip Rivers & Andrew Luck improved their efficiency in their first year playing under Reich, relying more on the quick game to reduce pressure. pic.twitter.com/yb7mWIbdLS

Though Jacoby Brissett did not come close to replicating that kind of production after Luck's shock retirement in the 2019 preseason, the combination of Rivers and Reich produced a bounce-back year in 2020.

Rivers was ninth in red zone passer rating, throwing 17 touchdowns to just one interception, and outperformed his expected completion percentage of 66.3 by connecting on 68 per cent of his passes.

In short, when Reich has been paired with a quarterback with the skill set to challenge the league's upper echelon, success has followed.

And, though Rivers was a substantially better quarterback than Wentz in 2020, the ceiling of the Colts' offense will be higher if the partnership that produced such remarkable results in 2017 delivers the desired impact for the Colts.

While Wentz has never recaptured the magic of 2017, he has consistently been more aggressive with the football than any of the quarterbacks Reich has worked with during his time with the Colts.

Since 2017, Wentz's air yards per attempt average has only once dipped below eight yards. That was in a 2018 campaign defined by injury issues and Wentz still had a narrow edge over Luck. Wentz (7.75) was 19th in the NFL with Luck (7.63) ending the year 20th.

Even in the low point that was last season, Wentz was fifth in air yards per attempt, Rivers was 26th.

His willingness to push the ball further downfield and the play-calling acumen of Reich resulted in Wentz finishing 2017 sixth in ANY/A, providing a clear indication of how that mix could elevate Indianapolis' attack.

Wentz also provides greater rushing upside than any of the quarterbacks Reich has had at his disposal as a head coach. Indeed, since entering the league in 2016, Wentz's 1,061 rushing yards have him sitting 11th among quarterbacks with a minimum of 500 attempts, a total that surely would have been higher had he played more than two full 16-game seasons during that span.

Carson Wentz just joined Kyler Murray and Cam Newton as the only QBs with 5+ rush TD this season.

Of course, for Wentz's reunion with Reich to pay dividends, his accuracy must improve. In two of his three seasons in charge, Reich has had two quarterbacks who had a well-thrown percentage above 80, meaning fewer than 20 per cent of their passes were poorly thrown.

Wentz has only surpassed 80 per cent once in his career, marginally outdoing Luck in 2018, when he ended the year on 82.5.

However, poor throws were a common feature of Wentz's game in 2020, as evidenced by his well-thrown percentage of 68.8.

Yet the fact he delivered slightly fewer poor throws than Luck in the former number one overall pick's Comeback Player of the Year season is testament to the talent Wentz possesses and the level of play of which he is capable.

Reich has had the most success at harnessing Wentz's best. If he can do so again in 2020, it would give the Colts a more dynamic downfield attack and potentially a more diverse offense that emphasises what Wentz can do with his legs.

For a Colts team that was on the cusp of knocking off an AFC heavyweight, the price they paid for a quarterback who represented extremely damaged goods will prove a bargain should Reich's repair job whip Wentz back into 2017 shape.